Posted on Monday, Sep 01 2008 @ 22:06 CEST by Thomas De Maesschalck
ASUS is one of the first PC makers to announce notebooks with a bamboo-clad enclosure. The firm already showcased these systems at several tradeshows but it seems they now finally have some real products: a 11.1" and 12.1" Bamboo series notebook.

ASUS Super Hybrid Engine: A Next Generation Breakthrough in Power Efficiency
All of the ASUS Bamboo Series notebook's power does not come at the expense of the environment. On the contrary, the ASUS Bamboo Series notebook – as with the new generation of ASUS notebooks released to market from the second half of 2008 – is remarkably energy-efficient, thanks to the implementation of ASUS' exclusive Super Hybrid Engine technology, which is the product of a comprehensive redesigning of the hardware, software and BIOS on the part of ASUS' engineers.

The most remarkable breakthrough of Super Hybrid Engine is that it accords users the control they need to obtain their desired level of performance – either improving power efficiency or boosting performance by the same technology core. In terms of power efficiency improvement, Super Hybrid Engine can extend battery life between 35% and 70% as compared to notebooks with the same specifications but without the technology, and yet enable users to boost their systems' performance by up to 23%. It achieves this by intelligently monitoring the power requirements of the notebook's components and automatically adjusting the power levels in real-time to match the current consumption needs, thus optimizing both system performance and power efficiency. Users are also given the option of selecting from a number of presets manually to ensure that the notebook conforms to the owner's usage demands.

With the accrued power savings, Super Hybrid Engine reduces yearly CO2 emission by 12.3kg per notebook. Given that ASUS ships approximately 6 million notebooks per year, this works out to a massive 73.8 million kilograms of CO2 emission reduced per year, which equates to saving 36 million trees annually.

Bamboo as an Alternative Material: The Natural Choice
ASUS has achieved international renown for its research into, and inspired use of, biodegradable materials such as leather in its products, but its decision to embrace bamboo is nothing short of ingenious. Through the use of bamboo which has an immense tensile strength that rivals that of many metal alloys, the ASUS Bamboo Series notebook is highly resilient – an attribute proven conclusively by the fact that it is the first notebook to have survived the unforgiving conditions of snow-capped Qomolangma Peak, which stands at a staggering height of 8,848 meters (29,028 feet). Bamboo also has a renewal rate that no other plant can match. It has been known to grow 60cm in just 24 hours, reaching its maximum height in several years. Bamboo is also capable of regenerating itself upon harvesting without necessitating replanting, making it possibly the perfect renewable resource. 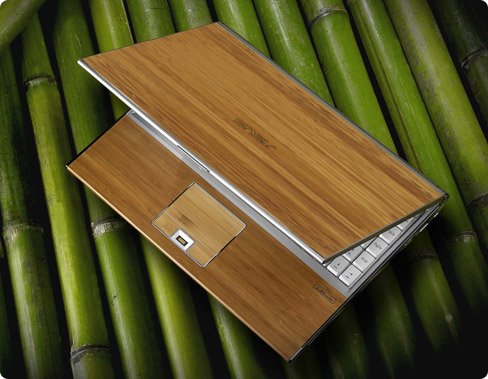