Posted on Monday, Sep 15 2008 @ 01:39 CEST by Thomas De Maesschalck
Panasonic debuts the Lumix DMC-G1, this is world's first Micro Four Thirds camera. It's basically a hybrid of a point-and-shoot camera and a digital SLR camera. A Micro Four Thirds camera features exchangeable lenses but ditches the mirror system, this means you'll have to use the LCD display to take pictures but it does allow camera makers to make much smaller, and lighter cameras.

The Panasonic Lumix G1 features a 12.1 megapixel Live MOS sensor and a large 3" LCD display. It will be available by the end of October.

Panasonic today announced the world’s first Micro Four Thirds system camera, the LUMIX DMC-G1, the world’s smallest and lightest digital interchangeable lens camera, weighing in at approximately 385 grams (0.85 lbs). Based on the new Micro Four Thirds System standard, the LUMIX G1 eliminates the internal mirror structure that defines digital single-lens reflex (DSLR) cameras, thus reducing the size and weight by nearly half. With the mirror-less system, the G1’s flange back, which is the distance between the mount and the image sensor, has been reduced from 40 mm – as specified in the Four Thirds System – to approximately 20 mm.

The new Panasonic LUMIX DMC-G1 will enhance the advanced photo quality and flexibility made possible by the Four ThirdsÔ System, and with its innovative design, consumers will appreciate the portability of a smaller camera body and lenses. The G1 will be available in mid-November as a kit with the new LUMIX G VARIO 14-45mm/F3.5-5.6 ASPH/MEGA O.I.S lens. Also available in November, and announced today, is the LUMIX G VARIO 45-200mm/F4.0-5.6/MEGA O.I.S.lens. 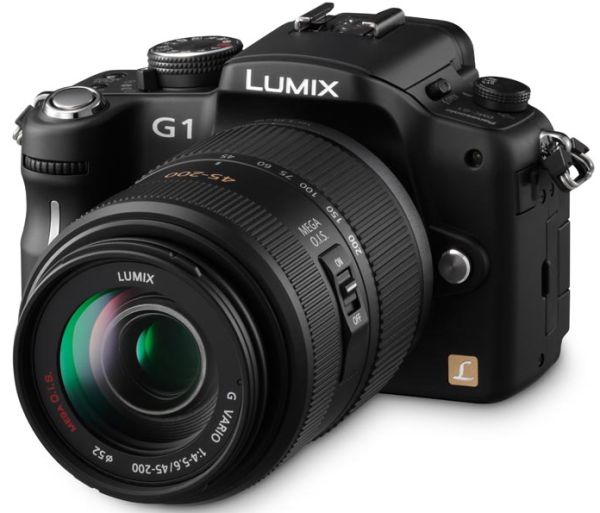