Spore becoming the most pirated game ever?

Posted on Tuesday, Sep 16 2008 @ 02:34 CEST by Thomas De Maesschalck
TorrentFreak reports the highly-anticipated Spore has been downloaded more than 500,000 times on BitTorrent since its release in early September. The site suggests the draconian DRM of the game is making thousands of gamers resort to pirated copies of the game. There's quite an outrage against the DRM of Spore, an example of this can be found at Amazon were 2,138 of the 2,374 reviews rated the game with just 1 star - mainly because of the intrusive DRM.

The idea behind DRM is that it will stop people from pirating the game, but in reality, it often has the opposite effect. As Forbes points out, many commenters on various BitTorrent sites now legitimize downloading this game because the official copies include some heavy and intrusive DRM.

“You have the power to make this the most pirated game ever, to give corporate bastards a virtual punch in the face,” deathkitten writes in a comment on The Pirate Bay. He or she is spot on. Spore has been the most downloaded torrent on The Pirate Bay for over a week, which is unique for a game.

Since September 2nd when Spore first appeared on BitTorrent, it has been downloaded a little over 500,000 times across various BitTorrent sites according to our most recent statistics. This download rate exceeds that of any other pirated game in history, and in a week or two from now it will be the most pirated game ever on BitTorrent.

As a comparison, Crysis, one of the best-selling PC games of this year has only been downloaded 420,000 times since it was released in November 2007. The Sims 2 currently holds the record for the most pirate downloads. There are no accurate stats for this game, since it was released long before we started tracking downloads, but we estimate that approximately 1 million copies have been downloaded. 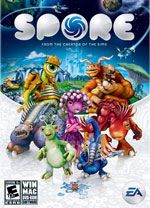