WoW: Wrath of the Lich King debuts on November 13

Posted on Tuesday, Sep 16 2008 @ 21:00 CEST by Thomas De Maesschalck
Blizzard announced World of Warcraft: Wrath of the Lich King will be released on November 13:

Blizzard Entertainment, Inc. announced today that World of Warcraft®: Wrath of the Lich King™, the second expansion for its award-winning subscription-based massively multiplayer online role-playing game (MMORPG), will arrive in stores on November 13 in North America, Europe, Mexico, Argentina, Chile, and Russia, and November 14 in Australia, New Zealand, Singapore, Malaysia, and Thailand. The expansion will be available in Korea and the regions of Taiwan, Hong Kong, and Macau on November 18. Details regarding the launch of Wrath of the Lich King in mainland China will be announced at a later date.

"We're looking forward to launching Wrath of the Lich King and finally giving World of Warcraft players a chance to take on Arthas and his minions," said Mike Morhaime, CEO and cofounder of Blizzard Entertainment. "Until then, we'll continue to refine and playtest the expansion content to make sure it provides a highly polished and entertaining experience." 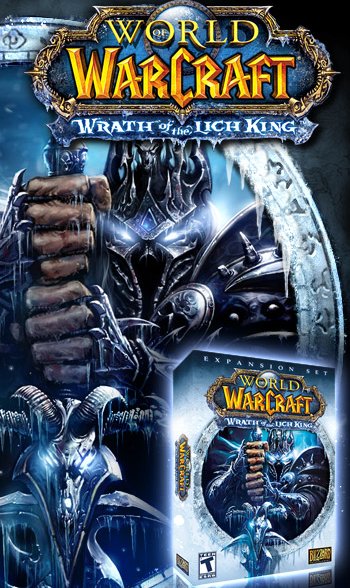