Acer Predator Gaming PC now available in the US

Hot, Futuristic Design
A powerful showcase of Acer’s innovation, the striking and edgy chassis design sports state-of-the-art technology. Its deep metallic copper color virtually shouts power. The front of the chassis can be raised for convenient access to a rewritable SuperMulti DVD burner. Located on the top of the chassis, the USB and audio ports are within easy reach and complemented by a front-mounted multi-card reader. Topping off the slick, futuristic look, the power button and front hard-drive door emanate cool blue rays of light.

Making upgrades quick and simple, this monster desktop provides easy entry to the hard disks via a special door on the front of the chassis. Plus, the standard Acer Easy-Swap hard drive bays allow the Serial ATA high-capacity hard disks to be quickly and easily added.

Bringing even more excitement to game dynamics, this action-packed desktop comes with an arsenal of accessories, such as a specially designed gaming mouse and a multimedia keyboard featuring illuminated keys that light up for play in the dark. Enabling a powerfully dynamic audio experience, the Aspire Predator also boasts high-definition 7.1-channel audio with EAX® (Environmental Audio Extensions) 4.0 and Dolby® Home Theater®.

Highly Scalable
And finally, for users who want to continually keep their PC up to date with the hottest innovations, the Aspire Predator permits integration of some of the most sophisticated technologies and components. The Aspire Predator comes with two 5.25-inch optical drive bays and is easily expandable with a variety of PCI Express® slots, including three x16, two PCI Express® x1, one PCI Express® x8 in addition to a standard PCI 2.3.

Combined with 1920 x 1200 maximum resolution, a super fast 2ms GTG response time and crisp 400 cd/m2 brightness, the G24 boasts outstanding picture quality. The screen swivels both horizontally and vertically with a 160-degree viewing angle from both positions. It also offers D-Sub, DVI and HDMI with HDCP inputs as well as VESA wall mounting. 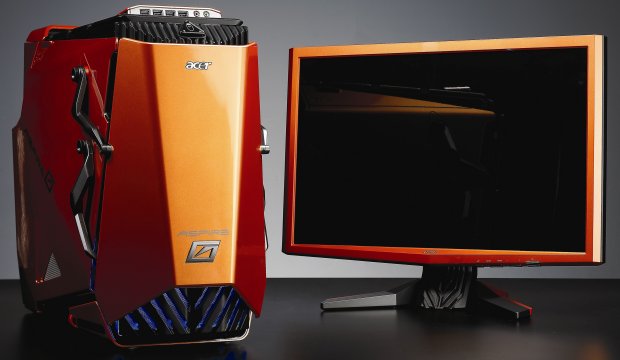 Premium gaming PCs aren't cheap, and the Acer Predator lineup starts at $1,649. Here's a look at the two available configs: