Google Latitude shows where your friends are 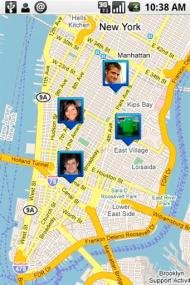 Google introduced a new feature for its mobile maps named Latitude, it lets you automatically share details about your whereabouts with family and friends:

The feature, dubbed "Latitude," expands upon a tool introduced in 2007 to allow mobile phone users to check their own location on a Google map with the press of a button.

"This adds a social flavor to Google maps and makes it more fun," said Steve Lee, a Google product manager.

It could also raise privacy concerns, but Google is doing its best to avoid a backlash by requiring each user to manually turn on the tracking software and making it easy to turn off or limit access to the service. Google also is promising not to retain any information about its users' movements. Only the last location picked up by the tracking service will be stored on Google's computers, Lee said.

The software plots a user's location — marked by a personal picture on Google's map — by relying on cell phone towers, global positioning systems or a Wi-Fi connection to deduce their location. The system can follow people's travels in the United States and 26 other countries.