Posted on Friday, Feb 06 2009 @ 03:01 CET by Thomas De Maesschalck
Electronic Arts studio DICE announced they're working on both Battlefield: Bad Company 2 and Battlefield 1943. The latter one will be available this summer for the PC, PlayStation Store and Xbox LIVE Marketplace, while Battlefield 2 is expected in early 2010 for the PC, PS3 and Xbox 360.

To get ready for the assault this winter, players can prepare for action in Battlefield 1943, an all-new multiplayer game available this summer via PlayStation®Store, Xbox LIVE Marketplace and on the PC.

In Battlefield: Bad Company 2, Haggard, Sarge, Sweetwater and Marlowe from ‘B' company fight their way through snowy mountaintops, dense jungles and dusty villages. With a heavy arsenal of deadly weapons and a slew of vehicles to aid them, the crew set off on their mission and they are ready to blow up, shoot down, blast through, wipe out and utterly destroy anything that gets in their way. Total destruction is the name of the game, delivered as only the DICE next generation Frostbite engine can. Either online or offline, enemies will soon learn there is nowhere to hide. Battlefield: Bad Company 2 will be available for the Xbox 360® videogame and entertainment system, the PLAYSTATION®3 computer entertainment system and the PC.

"Bad Company 2 takes everything that players liked in the original and ups the ante - more vehicles, more destruction and more team play," said Karl Magnus Troedsson, Executive Producer Battlefield Franchise, DICE. "Battlefield 1943 is a new take on a blast from the past classic coming to life with brand new technology that we're eager to get into players hands."

Below is a screenshot of Battlefield 1943: 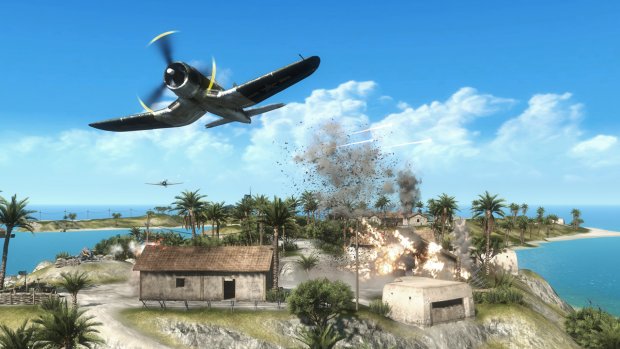