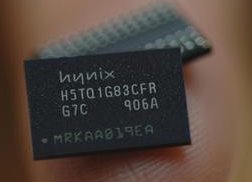 The new 1Gb DDR3 DRAM delivers a maximum speed of 2133Mbps (megabit per second) and operates at a wide range of voltage. The mass production of 1Gb DDR3 DRAM using Hynix' 40nm process technology is slated to begin in the third quarter of 2009, the company said.

Hynix' overall productivity of 40nm 1Gb DDR3 DRAM has increased by more than 50% over its existing 50nm process technology, according to the company. By applying technology of 'three-dimensional transistor' architecture, the product minimizes leakage current and further reduces overall power consumption.