Posted on Friday, Feb 13 2009 @ 23:08 CET by Thomas De Maesschalck
Samsung has introduced one of the first phones with integrated solar cells. The back of the Blue Earth device is covered with solar cells, and the South Korean electronics giant claims these panels deliver enough power to make a phone call when outdoors on a reasonably sunny day.

The phone has a large touchscreen and features a case made from recycled water bottles. There are also some other green features like an "Eco mode" and an "eco walk" application:

The Blue Earth also features the aforementioned solar panels on its back. While details on these panels are scarce (as is details on the phone's hardware and OS), Samsung claims that they will provide enough power for a user to make a call virtually any time outdoors. For more energy intensive touch-screen technology, the phone has a typical battery pack, which recharges via a newly designed "energy efficient" charger, keeping with the green image.

The phone also sports an "Eco mode" which allows the user to tweak screen brightness, backlight duration and Bluetooth for maximum energy savings. Samsung says its goal with the phone was "to draw attention to preserving our fragile environment." As to the design, it says the phone symbolizes "a flat and well rounded shiny pebble."

The phone features an "eco walk" application prebuilt into it, which acts a pedometer and counts the number of steps users take. It then tells them how much carbon dioxide emissions they save versus driving the same distance.

Samsung says the phone will debut in the UK in the second half of this year, launch dates for other parts of the world are unknown. 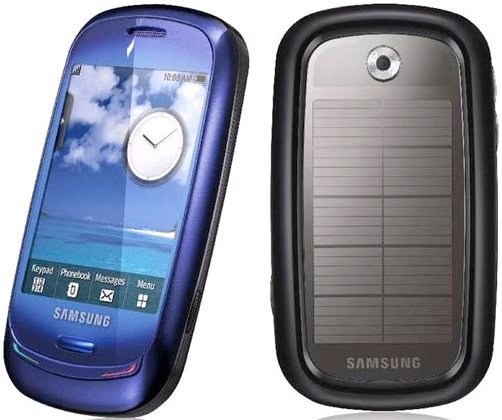