Posted on Wednesday, Feb 18 2009 @ 21:31 CET by Thomas De Maesschalck
Arctic Cooling has introduced the Accelero XTREME 4870X2 for the ATI Radeon HD 4870 X2 graphics card. This GPU cooler features 8 heatpipes, a large heatsink and three silent 92mm PWM fans that generate a total airflow of up to 81CFM. The heatsink has pre-applied MX-2 thermal paste, the cooler weighs 680g and has a max cooling capacity of 320W.

Arctic claims this cooler will reduce the temperature of a ATI Radeon HD 4870 X2 from 96_C to 46°C, while being significantly less noisy as well.

Outstanding cooling comes from outstanding components. The Accelero XTREME 4870X2 is equipped with three 92mm PWM fans running from 1,000 to 2,000 RPM, generating 81 CFM airflow which allows the fans to remove the heat from the two GPUs efficiently. The eight-heatpipe design also improves heat dissipation and achieves 320 Watts cooling capacity. The result is significant – the GPU temperature is 50°C lower than with the stock cooler. This enhances not only the overclock performance, but also extends the service life of your valuable graphics card.

By using the low noise impeller and patented fan holder, the three 92mm PWM fans are incredibly quiet. Also thanks to the PWM function, the fans run just at necessary speed while offering sufficient cooling at the lowest noise level. Even running at full speed 2,000 RPM, the Accelero XTREME 4870X2 operates almost in silent with only 0.5 Sone of sound, creating a much quieter gaming environment beyond anyone’s imagination. 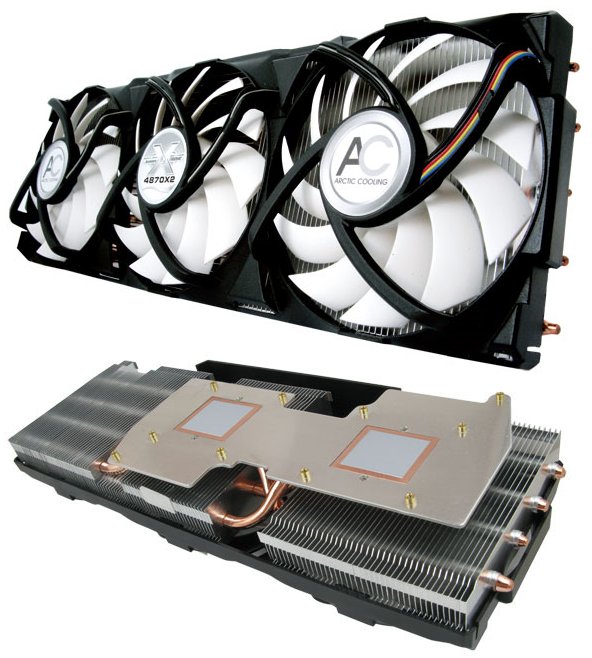