Posted on Thursday, Feb 26 2009 @ 16:41 CET by Thomas De Maesschalck
Sharkoon introduced its Silent Eagle Modular Fans, these 80mm and 120mm fans feature a modular cable system. These are the first fans I've seen that have this feature, they ship with four cables; there's one 4-pin PWM cable that can be controlled by the motherboard and the other cables allow you to chose between 12V, 9V and 7V.

Flexible cable management is now available for fans. At CeBIT Sharkoon will be showcasing a new innovation in fan design: a case fan with modular cable system. The Sharkoon Silent Eagle SE features a 4 pin connector built into the fan's frame and comes with four different cables for connecting the fan to a mainboard, fan controller or power supply. The fan can be used with a CPU cooler or as a case or hard drive fan. The speed of the fan can be controlled via PWM signal or through three different cables directly connected to the power supply. Users can, according to need, choose the connection type, fan speed, and consequently the loudness and purpose for which the fan is used. Sharkoon offers the Silent Eagle SE in 80mm and 120mm.

For Optimal airflow the fan features the typical Silent Eagle golf ball design. The surface of each blade has countless dimples, lowering resistance and limiting turbulence, in order to reduce noise at all speeds. In addition, the rounded frame helps to increase the flow of air. Included with the fan, in addition to the cables, are four screws to attach the fan or four rubber bolts that further dampen fan vibrations. 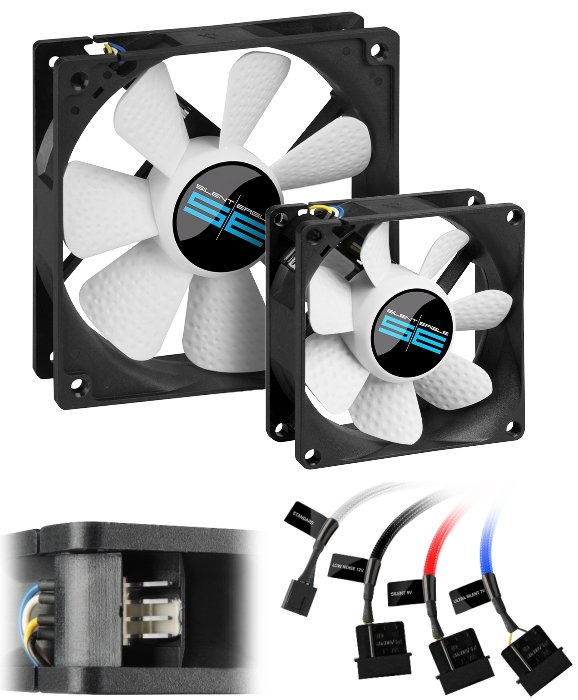