Posted on Thursday, Feb 26 2009 @ 21:16 CET by Thomas De Maesschalck
PC Games Hardware published details about an upcoming patch for Sacred 2 that will add support for NVIDIA's PhysX technology. Sacred producer Chris Grunwald states you'll need at least a GeForce 8800 for PhysX, and says a GeForce GTX 280 is required to get all features at best quality.

Grunwald also explained a GeForce card with PhysX support is really necessary for these effects, on an Intel quad-core system with Quad CrossFire setup they barely got 4 frames per second, and that's with low graphics settings and multiple optimizations. With an up-to-date NVIDIA grapics card you should get 25 to 60FPS.

Since Sacred 2 has to stay playable without Physx effects and since it is not easy to synchronize Physx features via a Close Net Server structure, the GPU physics are restricted to optional effects. As our comparative pictures show this means: Particles, or mini objects like stones or leaves which are affected by the weather or spells. Those enhancements only affect the visualization and the atmosphere, but not the gameplay. Ascaron took two spells of each character and upgraded them with Physx - the Seraphim's pillar of light for example which sucks in stones or leaves and releases them in a gush of particles.

Pictured below is an example of PhysX in Sacred 2. The first screenshot is without PhysX, and the second screenshot shows off the advanced visual effects made possible by PhysX: 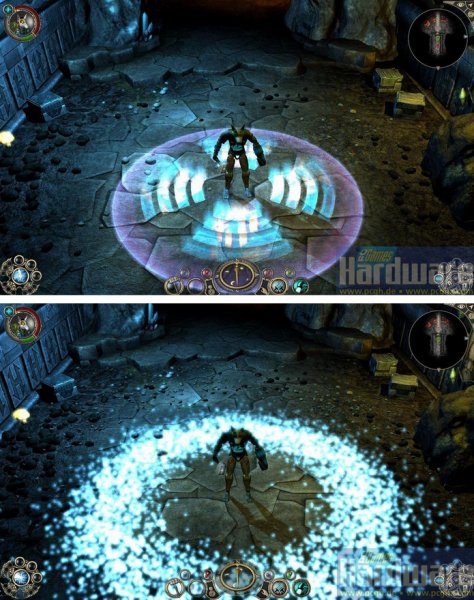