Posted on Friday, Feb 27 2009 @ 20:56 CET by Thomas De Maesschalck
ASUS has unveiled five Dark Knight graphics cards based on the new GeForce GTS 250 (which is actually a renamed GeForce 9800 GTX+).

ASUS, world-leading producer of top quality graphic solutions, has today unveiled its latest ENGTS250 Series of graphics cards. Catering to users who want a graphics card capable of delivering astounding graphical performances, the ASUS ENGTS250 TOP offers them up to 20% performance boosts for exhilarating gaming experiences. The ENGTS250 Series is also well equipped in the thermal department, with the specially designed Dark Knight fansink delivering extreme cooling and low noise-levels—greatly enhancing gaming enjoyment. Additionally, with inclusion of the EMI Shield, covered chokes, low RDS(on) MOSFETs, and solid capacitors, users will achieve extreme performance and peace of mind at the same time; and the ENGTS250 DK/HTDI/1GD3 version comes equipped with a mammoth-sized 1G of onboard memory ideal for feature-rich DirectX 10 gaming at ultra-high resolutions. Last but not the least, to show that ASUS cares for all gamers, the ASUS ENGTS250 Series graphics cards will all come bundled with a special coupon that allows users to obtain up to $25 or 10% off on a total of 5 games; or CUDA applications at the NZONE webpage.

Enjoy Exceptional Gaming Fun with 20% Performance Boosts
With the ASUS ENGTS250 DK TOP/HTDI/512MD3, gamers can expect GPU, shader, and memory clock performance boosts from 740 MHz up to 775 MHz, from 1836 MHz up to 1950 MHz, and from 2.2 GHz up to 2.36 GHz respectively. Such unprecedented performance upgrades help elevate the ENGTS250 DK TOP's 3DMark Extreme Preset score from 2682 to 3215—an astounding 20% improvement in terms of speed when compared to any other reference designed board! Gamers can now truly feel the full adrenaline rush of superb gaming performance—only with the ASUS ENGTS250 DK TOP.

Extreme Cooling with Dark Knight Fansink
Another advantage of the ASUS ENGTS250 Series is the specially designed Dark Knight Fansink. This innovative fansink is equipped with 4 heatpipes and a large heatsink surface area; and is comprised of an aluminum alloy that provides extreme cooling while retaining operating levels at only 32dB—almost imperceptible in a quiet room—catering to users who require maximum cooling without excessive fan rotation noise.

Unprecedented 1 GB Onboard Memory for Ultimate Graphics
Memory size plays an important portion in the delivery of graphical performance, as even a powerful GPU can suffer from bottlenecks due to slow or insufficient video memory. The more memory installed on a video card, the more data it can store—eliminating the need to access PC RAM to provide faster graphical performances. With most current and upcoming games requiring increasingly high video memory requirements, the ASUS ENGTS250 DK/HTDI/1GD3, with its unprecedented 1GB of built-in memory, is able to deliver greatly enhanced performances, and allow users to fully enjoy games or movies without lag or stuttering even at very high resolutions and maximum quality settings. 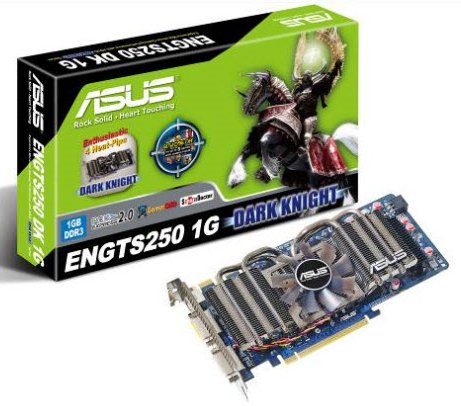