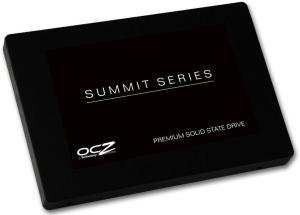 The OCZ Summit series solid state disks are expected by the end of April, according to a new report at DailyTech. The Summit SSD is aimed at the premium market, it will feature a controller and firmware from Samsung, with 64MB cache to improve random read and write performance.

The design is similar to Samsung's own 256GB SSDs, which are currently available only to OEMs (Original Equipment Manufacturers). Power consumption for the Summit series should be also comparable, using around 1 watt at load. There will be 30GB, 60GB, 120GB, and 250GB models.

The OCZ Summit series promises to be very fast, the firmware hasn't been finalized yet but you can expect sequential read speeds of around 250MB/s and sequential write speeds of more than 200MB/s. Random write speed performance is unknown, but it's expected to be a lot better than the horrible performance of SSDs with JMicron controllers.