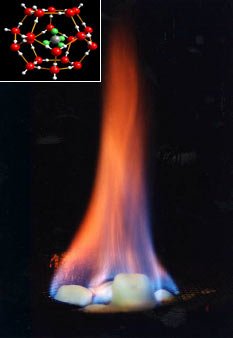 Researchers of the United States Geological Survey and oil company ConocoPhilips are investigating a new "green" method of extracting methane from clathrate hydrate. This is a lesser known fossil fuel that can be found under sediments on the ocean floor, the substance looks like ice but contains a lot of energy.

The scientists claim clathrate hydrate can become a carbon-neutral fossil fuel, as the methane can be extracted by pumping CO2 into the hydrate:

Due to their physical structure, clathrate hydrate cages "prefer" to have carbon dioxide at their cores, so if carbon dioxide is pumped into the hydrate, it spontaneously takes the methane's place. As a result, it should be possible to simultaneously extract methane and store carbon dioxide.

"Methane from hydrate could be a bridging fuel, to lead towards more renewable energies," says Tim Collett of the United States Geological Survey.

According to the results in Collett's presentation, the exchange process has been shown to work in the lab. Pumping carbon dioxide into rock cores containing hydrate successfully released the methane, and stored the carbon dioxide.

The US Department of Energy is now working with the oil company ConocoPhillips on a field trial in Alaska (pdf), to test whether the technique can be scaled up.

More info can be found at NewScientist. The US, Canada, Japan, China, India and Korea are all looking into harnessing methane ice as a possible energy source, it's estimated the amount of methane ice is greather than all proven reserves of coal, oil and natural gas combined.