Posted on Thursday, Apr 02 2009 @ 17:00 CEST by Thomas De Maesschalck
NVIDIA presented a HP Mini 1000 netbook with the company's Tegra platform and the Microsoft Windows CE operating system at the CTIA show. All the work was done by NVIDIA and there's no sign of a cooperation with HP, but the effort shows it's relatively easy to put Tegra in devices like the HP Mini 1000 netbook. More pictures and a video can be viewed at Engadget.

The concept isn't indicative of any sort of partnership between NVIDIA and HP, but the chipmaker is looking at this as an opportunity to demonstrate to manufacturers how easy it is to make a device like this -- and like other Tegra devices we've seen, this thing could easily have HDMI, run fluid 3D graphics, and generally make the world a better place at a stupid cheap price. We were also shown a Tegra single-board computer measuring no larger than a single small-outline DIMM like you'd find in a modern laptop, proof that this action can be scaled way down depending on the kinds of devices manufacturers are looking to make. 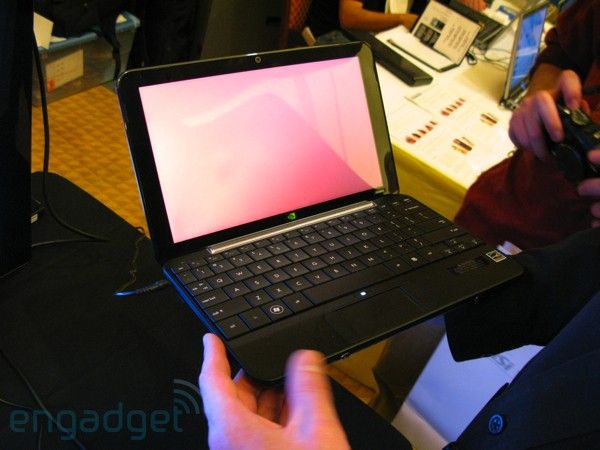 A bit more information can be found at Electronista. They heard NVIDIA is working with an OEM on creating a $99 Mobile Internet Device (MID) with advanced graphics functionality. NVIDIA's Derek Perez shared with the site that a major announcement will be made at the Computex show in June, and that a number of Tegra-based products should be available by the end of the year. Originally, the first NVIDIA Tegra based devices were expected by the end of 2008.