Posted on Friday, Apr 03 2009 @ 02:34 CEST by Thomas De Maesschalck
While benchmarking the ATI Radeon HD 4890 and NVIDIA GeForce GTX 275 graphics cards, Nathan Kirsch from Legit Reviews once again spotted an image quality bug in S.T.A.L.K.E.R. Clear Sky that has bothered him for months. On a GeForce GTX 275 the following scene renders fine, but on a Radeon HD 4890 or any other Radeon HD 4000 series card the military camo mesh of the tent is missing:

This is of course just one minor issue with one game title out of thousands available, but I thought it was interesting to point out that what video card you pick does impact your gaming experience. Sadly, no one has the time to sit around and play every single game on both NVIDIA and ATI graphics cards to make sure that all the objects are being rendered. Video card reviews are good at showing performance, but in the real world performance numbers don't add up to having a better gaming experience if objects in the game are not being rendered for some reason. Just to clarify again, both AMD and NVIDIA cards have this issue, but I spent a full day benchmarking for the Radeon HD 4890 versus GeForce GTX 275 and saw the issue once again. Then today, AMD sent out a press release claiming 'improved visual experience' on the same game title, so I have to be honest and call them out on this one.

UPDATE: Bright Side of News writes the issue is related to rendering paths, the issue only occurs when you use DirectX 9. The site recommends to always crank up the details to the maximum to avoid issues like these.

The problem lies in rendering paths - if you select Enhanced Full Dynamic Lighting, the render path is in DX9 mode and ATI 4000 series won't render cameo on a specific wireframe, as witnessed in screenshots below. But, if you turn Enhanced Fully Dynamic Lighting (DX10), you won't experience any issues. 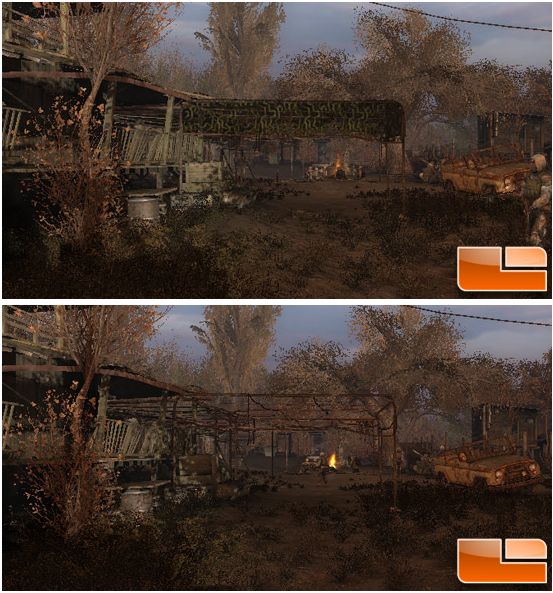