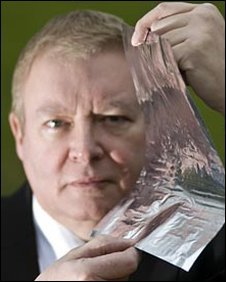 BBC News reports researchers at Warwick University have developed ultra-thin speakers that deliver clearer, crisper sound. These speakers differ from traditional speakers because they move air as a bulk mass rather than from a point source, making the sound more evenly distributed around the room. The new speakers could replace speaker systems at public places like train stations and shopping centres, or could be used as speaking posters to deliver advertisements.

The system, dubbed flat, flexible loudspeaker (FFL), started life as a piece of tin foil and some baking paper.

It provided proof of concept and since then the system has developed into a complex set of flexible laminates made up of different conducting and insulating polymers.

Traditional speakers work by converting an electric signal into sound. What makes the FFL different from existing speakers is that when stimulated by an electrical signal it moves air as a bulk mass rather than from a point source.

This means sound is more evenly distributed around a room without the blasting effect of traditional systems.