Posted on Tuesday, Apr 07 2009 @ 20:54 CEST by Thomas De Maesschalck
Pretec has introduced one of the first flash memory sticks with Power Over eSATA support. The drive is available in 32GB and 64GB capacities and offers 90MB/s read speeds and 60MB/s write speeds. However, current motherboards don't support Power Over eSATA yet so at this point the Pretec Cobra doesn't live up to its full potential yet.

Until motherboards with powered eSATA show up, you'll have to use the Cobra's USB 2.0 port and that's probably around 3x slower than eSATA.

Pretec has dubbed this the Cobra eSATA/USB SSD and it will be available in both 32GB and 64GB sizes. While the drive is capable of 90MB/s read and 60MB/s write, its speed will be limited until it can be used via eSATA due to the current limits with USB 2.0. Pretec says that they are currently shipping the drive but haven't offered any information concerning the price of the SSD. 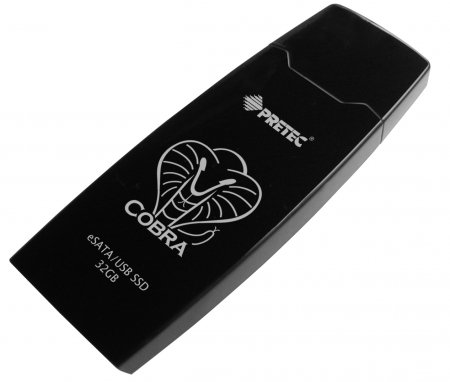