Posted on Thursday, Apr 09 2009 @ 22:41 CEST by Thomas De Maesschalck
Yesterday when OCZ introduced the Vertex Mac Edition solid state disks I noticed the max sequential read and write speeds of these disks are 10MB/s slower than the standard Vertex series. I didn't really bother with it but Theo Valich from Bright Side of News did and contacted OCZ to learn why the Mac Edition is slower than the PC version.

Valich learned it's due to Mac OS X limitations, the Vertex had to be slowed down to avoid saturation problems on Mac systems. The built-in SATA controller driver of Mac OS X can't handle fast storage devices like the OCZ Vertex, an update from Apple will be necessary to fix this problem but it's unknown when or if such an update will arrive. Until then, the only way to avoid it is to use an external RAID controller that comes with its own drivers.

We received an unexpected answer from Mr. Tobias Brinkmann, OCZ's Director of Marketing EMEA: "The Mac version has different read and write specs due to Mac OS limitations. It is officially validated by Apple but works on other systems as well."

You might be wondering, "what limitations?"... we conducted some research and discovered a reason. Folks, Mac OS X has an issue with drivers, and this was bound to happen - the Apple-written SATA controller driver gets saturated by a single SSD drive, yet alone several of them. 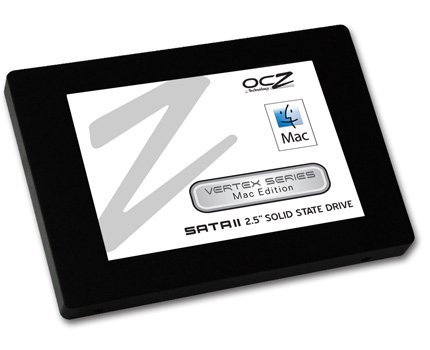