Posted on Monday, Apr 13 2009 @ 23:04 CEST by Thomas De Maesschalck
TPU writes MSI is working on the X58Pro-E motherboard, it uses the GreenPower technology and will reportedly come in under the $220 price point.

MSI has taken care of the essentials with this one. A basic 4+1 phase VRM powers the CPU, which uses the company's proprietary Driver-MOSFET (DrMOS) technology. Six DDR3 memory, three PCI-Express x16 slots supporting ATI CrossFireX technology, seven SATA II ports (six routed to the ICH10R, with one on the board routed to an external controller, the same controller providing an eSATA port), several USB ports, IEEE-1394 and gigabit Ethernet, make for all of this board's feature set. We predict this board to be launched alongside the X58M. 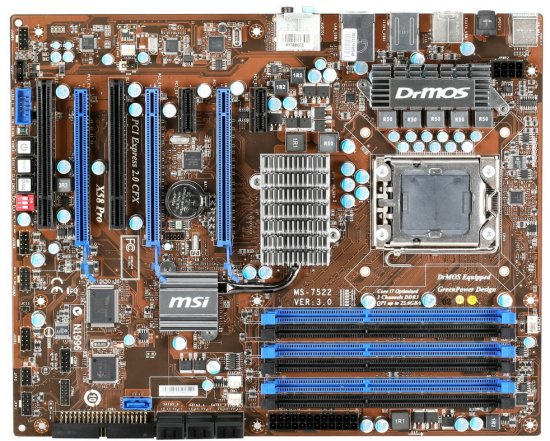