Martin believes loyalty is a problem for Twitter, because despite Twitter's explosive growth in recent months, the number of Twitter's returning users -- the retention rate -- does not outnumber those giving up on Twitter after trying out the site. This could prove problematic, because while a high retention rates doesn't guarantee a site's success. it is a prerequisite for growth.

To support his assertion, Martin points out that both Facebook and MySpace had retention rates around 70 percent when they were emerging sites like Twitter is now, while Twitter languishes below 40 percent. Things have improved, though; before Oprah started tweeting and Ashton Kutcher took on CNN for Twitter dominance, Twitter's retention rate was below 30 percent. 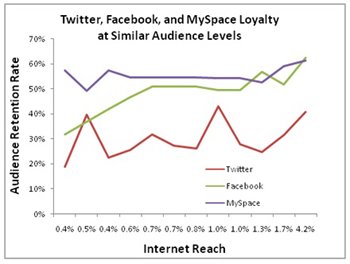