The cooler has four heatpipes and two aluminum heatsinks that are cooled by silent fans. Memory chip heatsinks are included, but it lacks VRM heatsinks or heatsinks to cool the NVIO display processors on G200 and G80 series cards. The Akasa Freedom Force is expected next month for around 30EUR ($40.50).

The Freedom Force measures 190(L) x 107.5(W) x 55(H), and weighs in at 440 g. Its design consists of a GPU contact block that doubles up as a heatsink, from which four aluminum heatpipes convey heat to two aluminum fin blocks on either side of the GPU block. Each block is subject to air-flow by its own white LED-lit fan that spins at 2200 rpm. The GPU block has mount holes for 43.2 mm, 53.2 mm, and 61.5 mm cooler mounts. Also bundled are nine memory chip heatsinks. 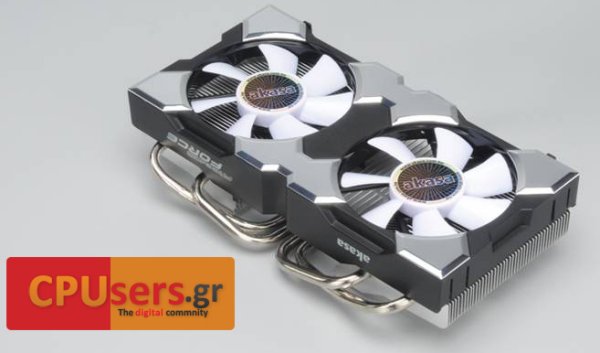