Posted on Wednesday, May 27 2009 @ 02:50 CEST by Thomas De Maesschalck
Intel just held a press conference in which the company spoke about its next-generation server processor, currently code-named Nehalem-EX. As its name suggests, the Nehalem-EX is based on the Nehalem microarchitecture which debuted with Xeon 5500 and Core i7 series processors. The Nehalem-EX series however, will be decidedly more high-end in terms of specifications and performance. Whereas current Xeon 5500 series processors feature four execution cores per CPU with support for up to eight threads through Intel’s Hyper-Threading technology, the Nehalem-EX series will be outfitted with up to eight execution cores per chip with support for up to sixteen threads, and 24MB of cache. In addition, Nehalem-EX will also sport features carried over from the Itanium line, like Machine Check Architecture (MCA) Recovery. Read more at HotHardware. 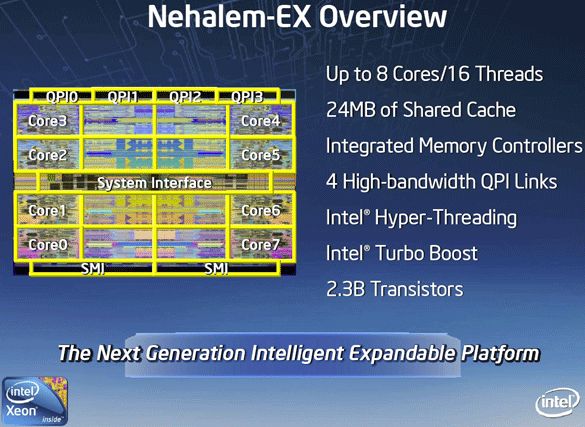