Posted on Thursday, May 28 2009 @ 08:49 CEST by Thomas De Maesschalck
Patriot Memory announced the Convoy, a series of dual 3.5" HDD/SSD enclosures. There's the regular Convoy PCXL25S and also the PCXL25SR which features RAID.

Convoy XL is a complete RAID solution with USB and eSATA connectivity. Dual 2.5" drive bays hold either two SSDs and/or HDDs mounted in one standard 3.5" form factor bay. The built-in RAID controller can be configured for performance (RAID 0), redundant for backup (RAID 1) or two drives combined to be one large drive (JBOD). Additionally the one-touch-backup (OTB) feature is a perfect complement of SSD's robust and durability nature.

"The recent growth in Solid State Devices will eventually derive a new standard in PC storage. While performance and enthusiast users continue to jump on the SSD bandwagon, desktop enclosures remain a challenge for 2.5" drives," said Les Henry, Director of Engineering. "The Convoy Series enclosures were built based on a single-bay dual-drive design which allows user to populate up to two 2.5" SSD or HDD in a single 3.5" bay."

In addition to the Convoy XL, a non-raidable version, Convoy, is available which still offers the ability to use 2.5" SATA SSD/HDDs in a 3.5" enclosure. 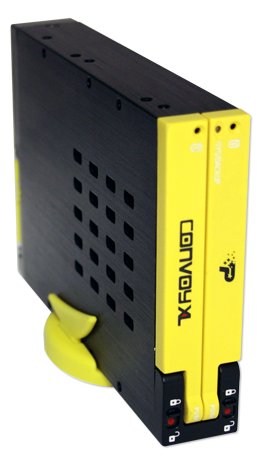