The clockspeeds of the card are the same as the GeForce GTX 285: 648MHz core, 1476MHz shaders and 2400MHz memory. Pricing is unknown, there will be only 1,000 units of this card and they might be released at Computex next week.

Each PCB holds 16 memory chips, a 6-phase digital PWM power circuit, drawing auxiliary power from an 8-pin PCI-E power connector, the GeForce GTX 285-class GPU, and its companion NVIO2 processor. The PCB holding the PCI-Express bus interface, also holds the bridge chip. ASUS broke away with using the nForce 200 chip, and instead is using a yet to be disclosed third-party bridge chip. Currently, PLX and IDT are two likely sources for such a chip. The memory consists of high-density 0.77 ns memory chips made by Hynix. 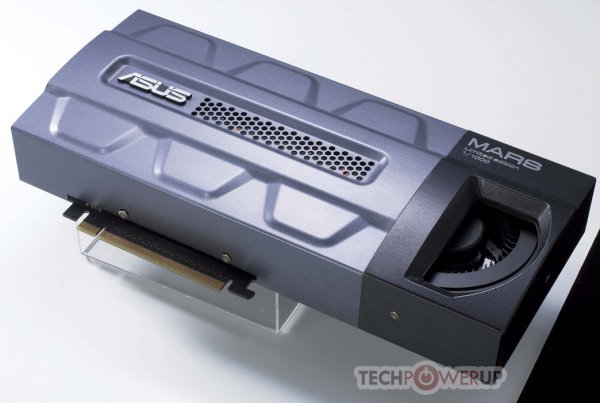