Posted on Friday, Jun 05 2009 @ 15:44 CEST by Thomas De Maesschalck
ASUS announced the W90 has been recognized by the Guinness World Records as the fastest notebook. The system scored 20324 3DMarks in 3DMark05.

ASUS is proud to announce that the ASUS W90 has been recognized by the Guinness World Records as the fastest notebook in the world. Powered by an Intel® Core™ 2 Extreme QX9300 processor and equipped with an ATI® Mobility Radeon® HD4870X2 graphics solution with 1GB of GDDR3 VRAM, the ASUS W90 achieved an unprecedented 3DMark06 score of 20324 at a recent overclocking gathering in Norway. This announcement comes shortly after the ASUS W90 clinched CNET's coveted Editors' Choice award. In the review, CNET's Joshua Goldman, the reviewer, said the multimedia powerhouse delivered "mobile gaming performance [that] is tough to beat", pointing out that the W90 had "outpaced all other notebooks in the processor-intensive performance tests" he conducted when running in overclocked mode.

The ASUS W90 sports an exterior design reminiscent of high performance sports cars. Head-turning looks aside, it provides users with the absolute best in multimedia entertainment and gaming. The setting of a new Guinness World Record solidifies its reputation as the epitome of extreme performance and irresistible style. 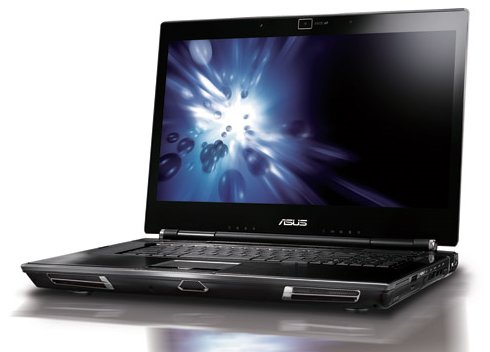