Posted on Friday, Aug 07 2009 @ 03:47 CEST by Thomas De Maesschalck
FUD Zilla spotted that ASUS has rolled out four motherboards based on the AMD 785G chipset. The ASUS M4A785TD-M EVO and M4A785TD-V EVO are aimed at AM3 processors, while the M4A785D-M PRO will be available in two versions, one for AM2+ with DDR2 memory and one for AM3 with DDR3 memory. Three of these motherboards use the microATX form factor, only the M4A785TD-V EVO has an ATX layout. All of these boards feature five SATA ports and come with eSATA support. Prices of these budget motherboards range from around 67EUR to 77EUR.

According to a product page at Asus' web site, the M4A785D-M PRO will be available the one that will come in two versions, one for AM2+ and DDR2 memory and one for AM3 and DDR3 memory. These microATX motherboards will have a single PCI-Express x16 slot, one PCI-Express x1 and two plain PCI slots, and will come with integrated ATI Radeon HD 4200 GPU. As these ones are meant for value part of the market they will not feature the 128MB SidePort memory chip. Both of these motherboards support CPUs with up to 125W of TDP, and feature a 4+1-phase power design.

Next in line are the M4A785TD-M EVO and M4A785TD-V EVO, both pretty much the same except for the fact that the first one is a microATX and the second one is an ATX motherboard, so you can expect the latter one to have additional PCI-Express x16 slot that works in x4 mode, one more PCI-Express x1 and one more PCI slot. Both of these will have the 128MB DDR3 1333 SidePort memory and both feature 8+2-phase power design so that 140W CPUs are supported. In addition to the usual ports, these two will also have a FireWire port as well. 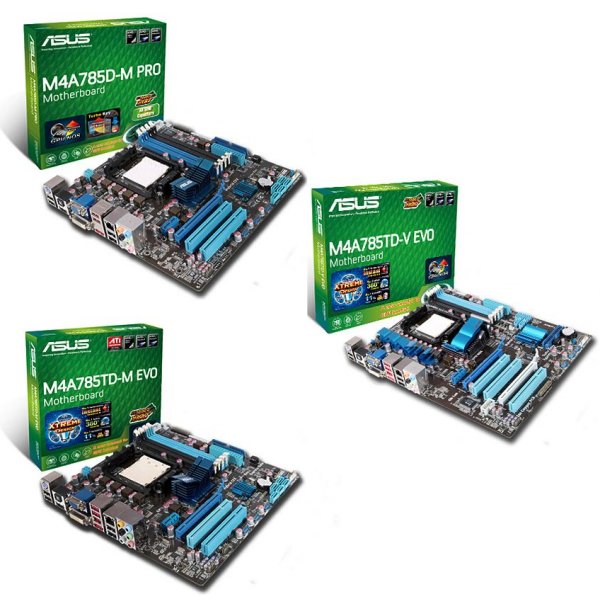