Posted on Tuesday, Aug 11 2009 @ 13:28 CEST by Thomas De Maesschalck
Lian Li has presented the Tyr PC-X1000, a new midi-tower case with three heat chambers and plenty of room. This case will be released by the end of this month for $420.

The Tyr PC-X1000 follows in the prestigious footsteps of its predecessors, namely the PC-X500 and the PC-X2000. Both of a controversial design with side mounted ODD bays. The PC-X1000 however has three traditional front mounted ODD bays as well as three front mounted 140mm fans down the front of the case. Similarly, the PC-X1000 has specific heat zones to isolate and extract heat more efficiently. The lower region is for HDD’s and the PSU, the central region is for the motherboard and all daughter cards including graphics. The topmost zone is for ODD’s and additional HDD’s. Some unique features include the completely tool-less design, the best side panel case entry latch and special mounting bays for 2.5”SSD drives. The Tyr PC-X1000 is destined to become your next power-user Chassis allowing unprecedented high performance components to be encompassed in a stylish minimalistic midi-tower chassis.

Zone 1
Lian Li is well known for craftsmanship and quality, and the Tyr PC-X1000 is no exception. The topmost zone is designed to encompass three ODD’s, and behind them, the removable HDD cage is situated. The modular HDD cage can contain 3x 3.5”HDD’s with special patented rubberized mountings to protect against vibration noise and sudden jarring. The 140mm extraction fan creates the necessary heat extraction point to make sure your rig is cooled quietly and adequately.

Zone 2
The middle zone is the area which requires the most cooling. Housing an ATX sized motherboard as well as area large enough to fit extra long graphic cards, the PC-X1000 has plenty of room and support. With additional Lian Li touches like opened areas for easy install and uninstall of heatsink plates, usually situated under motherboards, as well as a support bar to take the load off your heavy graphics cards. Further features include the all new PCI locking mechanism which secures PCI cards fast without the need for tools. The 140mm extraction fan directly adjacent to the CPU region is ideal to keep the hot air out. In addition the two 140mm intake fans draw cool air directly onto the hot main components. A nice extra touch is the two 2.5”SDD bay racks which are conveniently placed for ease of use and convenience.

Zone 3
The lowest zone also has a 140mm intake fan, as well as a modular HDD cage supporting 3x3.5” HDD’s. The power supply can fit in snugly, and is held in place by the patented PSU clip bracket giving a tool-less hold on something that is usually tricky to install. This tool-less implementation is the only such solution available on the market at present. The large area in the PSU region can also support Lian Li’s latest L-ATX factor PSU, which uses larger casing and direct tunnel airflow in their own brand PSU’s

The Zones and Cooling
The multi-heat zones are ideal for power systems in that they cool everything down fairly rapidly. The introduction of a continuous direct flow of cool air, while the hot air is extracted fast and efficiently ensures that your components have a longer lifetime and better optimal conditions for their optimal use. The entire airflow is controlled by a three speed fan controller @800-980-1200RPM which is mounted on the rear. All fans in the front are mounted on removable brackets and can be removed by thumb screws. The removable and washable air filters clip into the brackets and are removed quite easily. For those of you who do water cooling, there are also two rubberized opening for your LCS tubing.

The PCI brackets when not in use have vented grills which facilitate in airflow through the case. There is an additional vent at the base of the case to facilitate cool airflow for the PSU. The vent has a removable washable filter.

More features include support for ATX, and Micro-ATX motherboards, 8x PCI slots, water cooling support (holes for water pipes). The PSU is mounted with anti-vibration and insulated rubber strips on the mounting platforms.

The essence of Lian-Li products is the craftsmanship of the engineering. Intrinsic to the workmanship and quality is the customization which includes a whole host of optional extras that can be purchased to add more features to an already feature rich product. 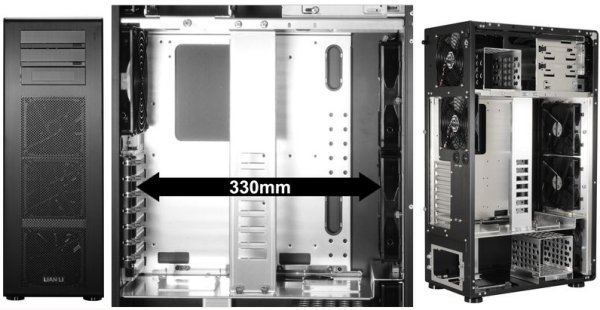