Posted on Wednesday, Aug 12 2009 @ 02:00 CEST by Thomas De Maesschalck
Turtle Beach has presented the Ear Force X41, a new Dolby 7.1 channel surround sound wireless headset for the Xbox 360. This new wireless headset will soon be available for around $200.

“We listened to suggestions from XBOX® gamers who own our second generation wireless headset, the Ear Force X4, and decided to take the X41 to a whole new level by improving nearly every aspect of the original design.” said Peter Ronick, Director of Marketing. “The X41 includes a dedicated Digital Signal Processor for creating an accurate 360 degree sound field with the latest Dolby Headphone HRTF algorithms. It provides an unprecedented sense of immersion that’s further enhanced by CD-quality, uncompressed, digital RF wireless technology.”

The X41 includes all of the features that make Turtle Beach Ear Force the most popular brand of headsets for avid XBOX gamers, including Chat Boost™, which automatically increases the volume of XBOX LIVE chat as the game gets louder, microphone monitoring so you can hear what you’re saying even though the headset is covering your ears and bass boost to enhance the deep bass from explosions and other sounds. For superior sound fidelity, the X41 ear cups incorporate oversized 50 mm speakers. The adjustable boom microphone is also removable, keeping it out of the way when you’re not using XBOX LIVE chat.

A digital optical input on the X41 transmitter connects to the XBOX 360 for pure-digital, high-quality audio. A digital optical output connection to a home theater system for simultaneously using the X41 headset and home theater speakers. Analog stereo inputs let you use the headset for listening to MP3 players, TV audio or other analog sources.

Enhancements in the X41 over the original X4 model include:
- The X4 analog infrared wireless signal has been replaced with digital 2.4 GHz RF wireless technology, for low-latency, uncompressed, CD-quality sound with no background hiss, no interference from plasma TV screens and no line of sight restrictions between the transmitter and headset.
- The X41 uses the latest version of Dolby technology to support game sound in 7.1 channels instead of 5.1 channels, for improved surround sound accuracy.
- Dolby Pro Logic has been upgraded to Dolby Pro Logic® IIx.
- The X41 transmitter includes a headphone jack and volume control for an additional wired headset, so a second player can hear the same Dolby surround sound that’s being transmitted to the X41 wireless headset.
- The X41 transmitter is powered by a USB port on the XBOX or nearby PC, Mac or laptop, so gamers will have one less power adapter to worry about. This is especially convenient when using it overseas, since it eliminates the need for special power adapter plugs.
- A new “battery booster” circuit in the headset extends battery life for up to 25 hours and assures that the sound quality will stay crisp and clear until the batteries are completely drained. Optional rechargeable batteries can be used in place of alkaline batteries.
- The velvet ear cushions used on the X4 have been replaced with rich, soft, fabric mesh cushions that let your ears breathe, for added comfort during long gaming sessions.

Although primarily designed for XBOX 360 gaming, the Ear Force X41 is compatible with other gaming consoles (note that the integrated microphone works only with the 360) and can also be used as a home-theater accessory for enjoying DVDs in Dolby surround sound, watching TV or listening to music. 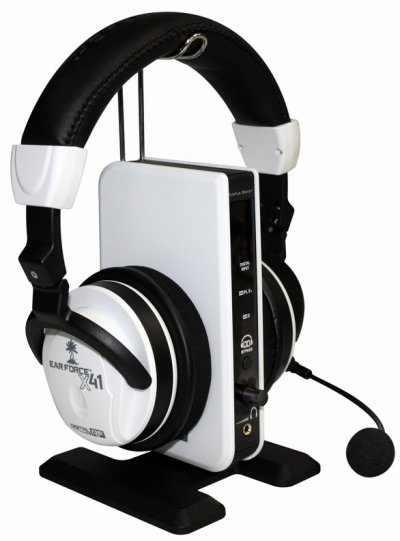