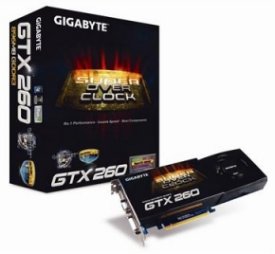 Gigabyte introduced the Super Overclock graphics card brand, the company claims cards in this series feature cherry-picked GPUs that can achieve higher frequencies and voltages than the average GPU. The first card in the series is the GV-N26SO-896I, a GeForce GTX 260 graphics card with a 680MHz core, 1466MHz shaders and 896MB GDDR3 clocked at 2350MHz.

GIGABYTE, a leading manufacturer of motherboards and graphics cards, announces a powerful new addition to its product lineup: the Super Overclock Series. All of the GPUs in this new range of high-end graphics cards have been cherry-picked for top performance, efficiency and reliability. Utilizing GIGABYTE’s innovative GPU Gauntlet™ Sorting process ensures that only premium GPU processors are used in these graphics cards. Coupled with Ultra Durable VGA boards, users can rest assured that the Super Overclock Series graphics cards won’t let them down when they step onto the digital battleground.

In addition, GIGABYTE’s proprietary testing toolkit allows engineers to inspect and select the GPUs with the highest frequency. This program operates for 30 minutes and provides important data on the maximum overclocking ability when compared to a stock GPU. Once the Super Overclock point has been determined, engineers will boost the frequency to offer the highest factory default clock setting in the market.

Next, each Super Overclock Series GPU faces the Graphics benchmarks, FurMark and 3DMark Vantage, to measure performance and stability under an intense graphics load. A GPU that passes this stage will perform at a lower temperature and fan speed compared to a standard GPU. By choosing the cream of the crop, GIGABYTE ensures rich rendering of intricate 3D scenes and realistic physical effects such as water, gas, steam, fire, etc for a lifelike gaming adventure.

Last but not least, engineers test the power switching and stability. The GPUs with the best power efficiency and lowest power consumption qualify for the Super Overclock Series. And GIGABYTE understands that premium graphics cards should not sound like a cement truck rolling down the freeway, so a large cooling fan provides for a quiet computing environment.