Posted on Monday, Aug 31 2009 @ 14:49 CEST by Thomas De Maesschalck
While most upcoming P55 motherboards from ASUS will not offer built-in SATA 6Gbps support, the company plans to offer an optional SATA 6Gbps add-on card. The card features a PLX8613 expansion bridge chip and will provide you with two SATA 6Gbps ports, but it is unknown how much it will cost.

There's certainly a performance improvement to be had, though. ASUS' P7P55D Premium test bed, equipped with a Seagate ST3500410AS drive, scored a HD Tach Burst Speed of 281.5MB/s. Compared to a SATA 3G board - scoring 185.9MB/s - that's a notable boost. 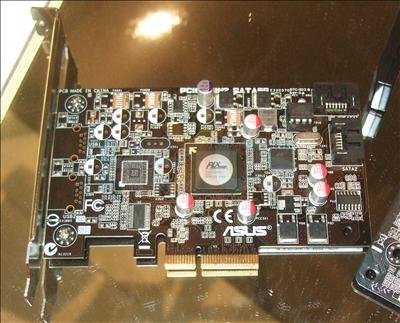