gScreen founder Gordon Stewart says the Spacebook, which weighs about 12 pounds, is absolutely the opposite of a netbook. It's huge, expensive and offers about 30-inches of screen space when you use both screens. The first gScreen Spacebook laptops are expected in December, with pricing said to be under $3,000.

The Alaska based company, started by Gordon Stewart (yep, that is where the G in gScreen comes from), is aiming its dual screen laptops at professional designers, filmmakers, photographers and really anyone who can't live without a dual screen for everyday productivity. They have also been in talks with the military. The chassis (which we expect is at least 12 pounds) is built around the 15.4 inch screen (though the first units that come to market will have 16-inch or 17-inch screens) and its twin, identically sized screen slides out from behind the first using a uniquely designed sliding mechanism. 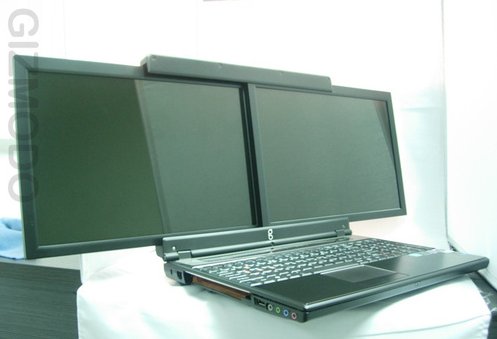