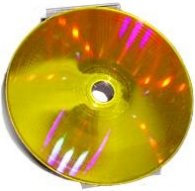 General Electric has shown a new holographic storage technology that is backwards compatible with DVD and Blu-ray. A disk in the shape of a regular CD could store 500GB using this technology, with capacities of 1TB and higher potentially possible in the 2011/2012 period. The initial cost per gigabyte is expected to be around 10 cents in 2011/2012, and consumer drives with this technology may appear by 2014 or 2015.

Holographic storage involves holograms, images of data, being stored in layers in a CD-sized disk's recording surface. The images are created by two laser beams and read by a laser beam. GE's researchers at its Applied Optics Laboratory managed to shrink these images, calling them micro-holograms. They achieved this to the point where the images were also reflective enough - 200 times more so than before - to be read by optics that could be used to read existing optical formats. A CD-size disk could store 500GB using this technology, with 1TB and greater capacity potentially possible in the 2011/2012 period.

More info at The Register.