Posted on Wednesday, Oct 07 2009 @ 15:49 CEST by Thomas De Maesschalck
Scientists have discovered a new ring around Saturn that is much bigger and further out than any of the gas giant's other rings. The colossal ring lies some 13 million km from the planet, about 50 times more distant than the other rings and in a different plane. It's very diffuse and scientists believe it's probably made up of debris kicked off Saturn's moon Phoebe by small meteor impacts. More details at BBC News.

"The particles are very, very tiny, so the ring is very, very tenuous; and actually if you were standing in the ring itself, you wouldn't even know it," Dr Verbiscer told BBC News.

Indeed, so feeble is the ring that scientists have calculated that if all the material were gathered up, it would fill a crater on Phoebe no more than a kilometre across. 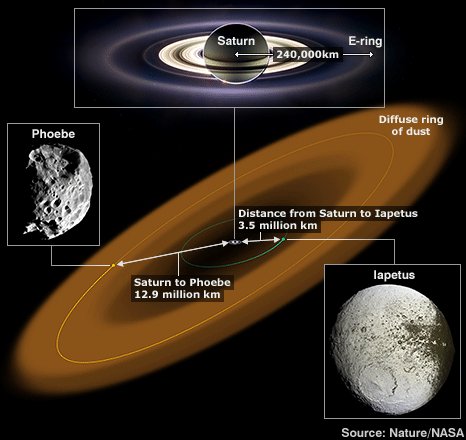