Posted on Monday, Oct 12 2009 @ 18:28 CEST by Thomas De Maesschalck
LG today showed off a prototype of an e-book reader device that features the Sony Reader with a 6" e-paper display along with a new solar power cell from LG. The thin-film solar cell measures 100mm in width and length, it's 0.7mm thick and weighs just 20g. According to the company exposing the Solar Cell e-Book to sunlight for about four to five hours would extend the battery life by a day. The current prototype has an energy conversion efficiency rate of 9.6 percent, the company aims to improve this to 12 percent by 2010 and up to 14 percent by 2012.

The current energy conversion efficiency rate of this product is approximately 9.6 percent. Exposure to sunlight for about four to five hours would extend the running time of the e-book’s battery by a day without the need for additional charging. This would allow longer outdoor use of the e-book and lessens worries about battery discharging.

Mr. Ki Yong Kim, head of the Solar Cell Office at LG Display noted, “E-books are attracting a lot of attention because they offer the advantage of storing thousands of books’ worth of contents in an easy-to-carry device. The idea of e-book combined with solar cell will offer users the added benefit of longer usage. We will continue to provide users with enhanced convenience and value to solidify our lead in next-generation, environmentally friendly products.”

LG Display previously had announced plans to nurture its thin-film solar cell business as a future growth driver. The company aims to raise the energy conversion efficiency rate to 12% by 2010, and eventually achieve efficiency rate of 14% in 2012 to prepare for commercialization. 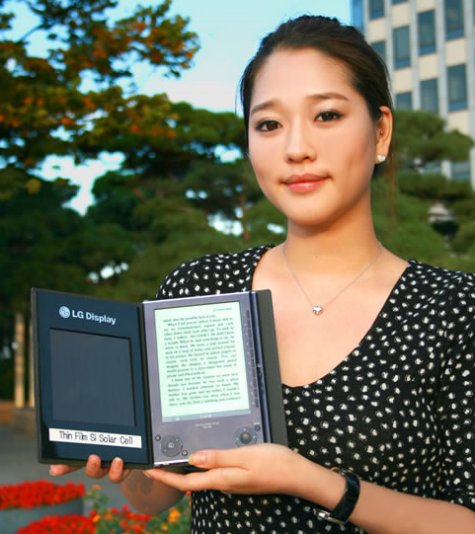