Posted on Tuesday, Oct 20 2009 @ 20:46 CEST by Thomas De Maesschalck
Lexar Media will soon release 600x CompactFlash memory cards with capacities of 8GB, 16GB and 32GB. These memory cards offer read/write speeds of up to 90MB/s, the 8GB and 16GB models will ship on October 22 while the 32GB version will follow in November.

“Photographers are constantly demanding more from their equipment, and an increase in image capture speeds paired with a decrease in image transfer times can mean the world to a professional shooter,” said Jeff Cable, director of marketing, Lexar Media. “The combined solution of our new Professional 600x CF card and Professional ExpressCard CompactFlash reader is the next step in CF memory technology and will provide photographers with the speeds and performance they need to capture the best shots and improve their imaging workflow. When shooting with newer cameras like the Canon EOS 7D, Canon EOS 5D Mark II, Nikon D3x or Nikon D300S, professionals can capture more images per second and hundreds of JPEG files without pausing to clear their cameras’ buffers.” 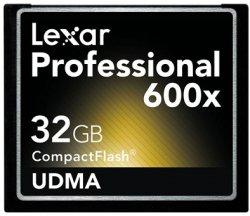