Sharkoon introduces two all new high-performance, and quiet, Tower-coolers for the AMD- and Intel-processors. The Sharkoon Silent Eagle CPU cooler options are the Model C92 with a 92mm fan and Model C120 with a 120mm fan. Both provide four U-equalizing 8mm cooling heat pipes and premium aluminium fins for efficient heat dissipation. This is further strengthened by the Direct-Touch-Technology: The heat pipes rest directly on the processor, so that the heat is released directly without having to detour through an extra plate to the cooling fans.

Contained within shipping are the installation materials for the AMD Socket 754, 939, and AM2/AM2+, as well as the Intel Socket 775 and 1366. The C92 uses a practical Push-Pin fastener for assembly to the Intel system; the larger C120 must utilize the supplied stable back plate. Additionally enclosed within shipping is a tube of thermal grease, a spatula, and instructions in eight different languages. On further up coming shipments, mounts for Intel?s latest Socket, 1156, will also be available. 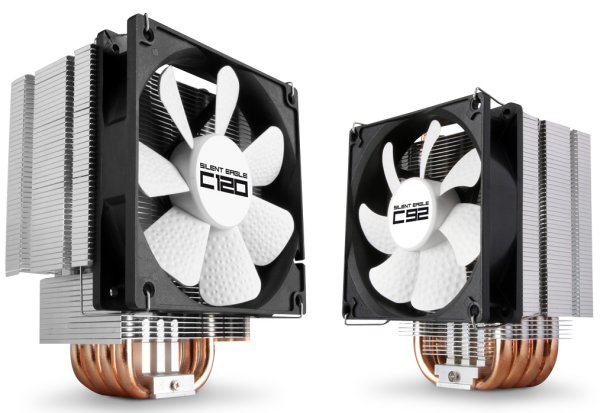