Built from the ground up, the latest GeForce 200 series graphics card is a big step forward. Built on 40nm the GPU will consume less energy and have less heat production. This allows better clock speeds, a higher overclocking potential and lower temperatures. The smaller die-size together with the support for DirectX 10.1 and Shader model 4.1 really adds a future proof coating to the GT240.

Another major improvement is the support of GDDR5 which literally multiplies the possible memory clock by two! The new PCB design also has integrated HDMI audio so no additional SPDIF cable is required for rerouting the sound to the HDMI cable.

The GeForce GT240 will initially be available in three models where the difference will be in the memory type. The GT240 has a total of 96 shader processors available to balance all calculations. The GPU clock of runs on 550 MHz whereas the shader processors will operate on 1340 MHz.

The fastest GDDR5 version will be equipped with 512MB running on a ludicrous 3600MHz. Two DDR3 versions will have 512MB or 1024MB running respectively on 1800MHz and 1600MHz. Point of View has teamed up with well-known cooler manufacturer Arctic cooling for the thermal solution on the GT240. Low noise, low temps, max performance! 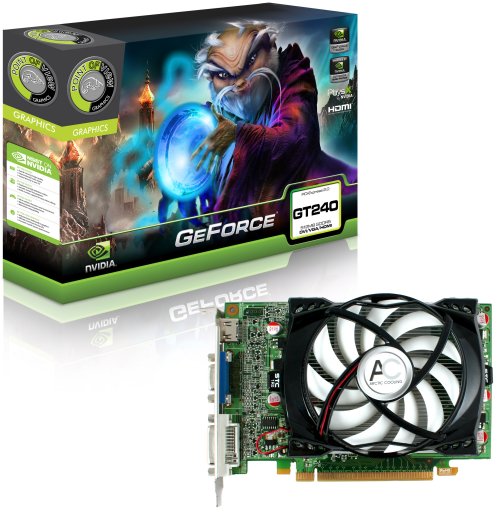