Posted on Wednesday, November 03 2010 @ 13:46 CET by Thomas De Maesschalck
The Fedora Project published Fedora 14, you can download Fedora 14 over here.

"I'm very proud of the work that has been put into Fedora 14," said Jared Smith, Fedora Project Leader. "A myriad of contributors have helped to make free and open source software more pervasive with this release."

* Framework software for Spice, a rapidly advancing infrastructure for desktop virtualization
* New debugging features for developers, such as support for dynamic/unplanned memory usage tracking and faster launch thanks to pre-generated indexes
* Powerful remote and out-of-band management capabilities with Intelligent Platform Management Interface (IPMI) support
* Updated tech preview of the GNOME shell environment, part of the upcoming GNOME 3.0 release
* A subset of new and innovative software from the MeeGo™ community for an enhanced experience on netbooks and small devices
* OpenSCAP, an open-source framework for the Security Content Automation Protocol, which provides a framework and approach to maintaining system security backed by NIST standards
* Support for emergent programming languages like D, and refreshed versions of popular languages such as Python 2.7, Erlang R14, and the Rakudo Star implementation of Perl 6

Premiering alongside Fedora 14 is a new re-design of Fedora's community-supported website, fedoraproject.org. The new site is a culmination of work completed within multiple areas of the Fedora community including the Design, Websites, Marketing, Translation and Infrastructure teams. The new website showcases the capabilities Fedora offers for many different types of users, including developers, designers, general productivity users and more. It was designed and created entirely using free and open source software that is available in the Fedora repository, and maintained and translated by a team of contributors, collaborating from around the world. 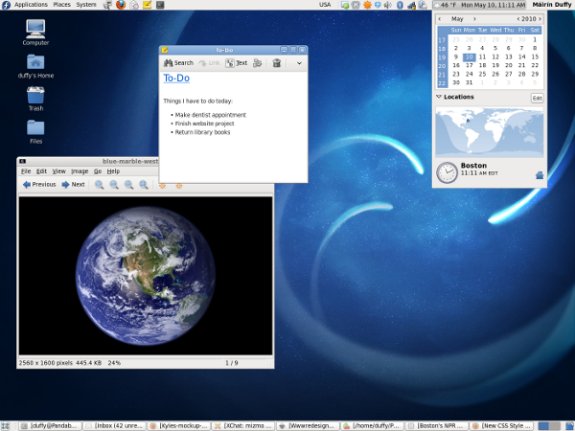