The world's fastest GPU has arrived with the EVGA GeForce GTX 580. Experience blockbuster games like Call of Duty®: Black Ops and Tom Clancy’s H.A.W.X® 2 in their full glory with everything cranked to the max. Not only does the EVGA GeForce GTX 580 rip through the latest games, it also runs quieter than the previous generation. And as you have come to expect from the GeForce GTX GPU, the GTX 580 packs support for all the premium GTX gaming technologies such as NVIDIA Surround, 3D Vision, PhysX and SLI. With all these features and more, it is easy to see how the EVGA GeForce GTX 580 obliterates the competition.

“EVGA is excited to unveil the GeForce GTX 580 graphics card. This product offers stellar 3D gaming performance and unbelievable DirectX 11 features, all while running cooler and quieter than previous cards”, said Bob Klase, VP of Sales at EVGA. “With this product, EVGA will continue to offer the best graphics cards to the gaming community.” 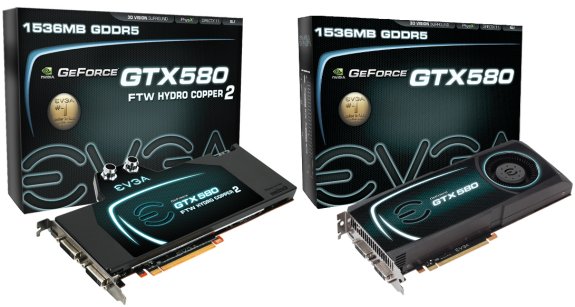