Posted on Tuesday, November 16 2010 @ 22:40 CET by Thomas De Maesschalck
Several tech sites had the opportunity to platform with a test platform of AMD's upcoming Brazos. Looks like the Bobcat-based Zacate chips will spell some real trouble for Intel's low-end lineup, the performance is better than Atom's and the chip packs relatively decent integrated graphics.

One review can be read at The Tech Report, they conclude AMD pulled off quite an impressive feat with Zacate:

AMD has pulled off quite an impressive feat with Zacate. On the CPU front, the dual Bobcat cores clearly play in the same league as Intel's entry-level CULV and CULV 2010 processors. That means performance largely acceptable for everyday tasks, from web surfing to file compression. Even enthusiasts using an ultraportable or a nettop as their second or third PC ought to find this kind of performance acceptable. On the graphics front, meanwhile, Zacate succeeds in outpacing both previous AMD solutions and current Intel ones by a fair margin.

AnandTech also has some coverage, you can read it over here. They conclude the chip will be very successful in ultra-thin form factors:

Brazos ultimately has the same problem Atom had at its introduction. Compared to similarly priced notebooks based around 2.2GHz Pentium dual-core CPUs or Core i3s, the CPU just isn’t competitive. Unlike Atom however, in GPU bound scenarios the E-350 is actually faster than those two. The only issue, as I mentioned above, is that currently the majority of mainstream applications that are GPU bound are 3D games. Like Atom however, the Brazos platform is also destined for ultra thin formfactors - places a low end Core i3 can’t go. It’s in that comparison that AMD is most successful.

Compared to a Core i3-330UM, Brazos offers much better GPU performance and it’s even competitive in CPU dependent games like Starcraft 2. The i3-330UM is still faster CPU bound scenarios though, reinforcing the CPU speed for GPU performance tradeoff that you’re faced with when considering these two. 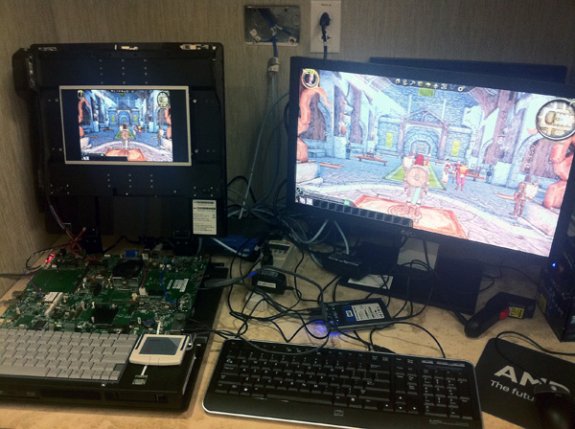