Posted on Wednesday, February 02 2011 @ 14:29 CET by Thomas De Maesschalck
Jon Peddie Research (JPR) finished its report about GPU marketshare trends in Q4 2010. Overall shipments of graphics devices for the year 2010 were disappointing, the industry saw a 4.3 percent growth compared to 2009, while optimistic analysts were expecting double digit growth. Compared to Q3 2010, GPU shipments declined by 2.6 percent but this is mainly because Intel saw its unit shipments decline by 7.3 percent. AMD and NVIDIA both saw a growth of 2.3 percent and 4.1 percent, respectively. Here's the full PR and a table with the marketshare developments:

Overall shipments of graphics devices for the year, 2010 came in below expectations with an unimpressive 4.3% total year to year growth—a disappointing result given the enthusiastic start of the year. Q4 of 2010 did not boost the year as expected. Instead of the traditional seasonal pickup, market leader Intel showed decline, which affected the overall results.

Over 113 million graphics chips and CPUs with graphics shipped in Q4 2010. Intel was the leader in unit shipments for Q4’10, elevated by Clarksdale, continued Atom sales for Netbooks, and Sandy Bridge. However, on a quarter-to-quarter basis AMD and Nvidia gained market share at Intel’s expense. AMD reported Graphics was 26% of the company’s total sales, an increase of 8.7% sequentially and 0.7% from last year. The graphics business benefited from a double-digit volume increase.

Intel reported revenue from chipset and other revenue of $1.68 billion in Q1, however that does not include embedded graphics CPUs.

Nvidia’s quarter, which straddles the calendar quarters reported revenues of $844 million for their Fiscal Q3’11 which is from September to the end of January. Their next quarter ends in April.

What happened?
We were told by the sharpshooters that this was going to be a 15% to 17% growth year for the PC. Gartner and IDC reported the year came in at ~13%. But Graphics are a leading indicator, a sell-in part, and lackluster sales of graphics are a bad-news bellwether for the PC industry.

So we’re getting mixed results and messages. Some analysts are saying tablets— or more precisely, the iPad, has cut into low end PC sales. If that’s true then it would for sure show up in graphics. And given how low the growth was for graphics it looks like there may be a causality relationship. We will be posting a blog (on www.jonpeddie.com) on the pros and cons of counting tablets and other devices as “PCs.”

This uncertainty in definition, methodology, and sell through is shaking up the fluffy white stuff in our snow globe and making seeing into the future challenging. However, we continue to be optimistic about the future for PCs into 2011. There is momentum for machines used in business, creative content, and entertainment. The iPad and coming tables will remain very attractive adjacent devices and will primarily affect the low end of notebook sales.

Although numbers were down in Q4 we expect 2011 to be a strong year for GPU sales. The full adoption of DX 11 for mainstream and high-end systems will take place putting a premium on GPU sales, AMDs Fusion and Intel’s Sandy Bridge should hit their stride. Couple all that with an improving US and World economy, and 2011 should be solid year all-around. 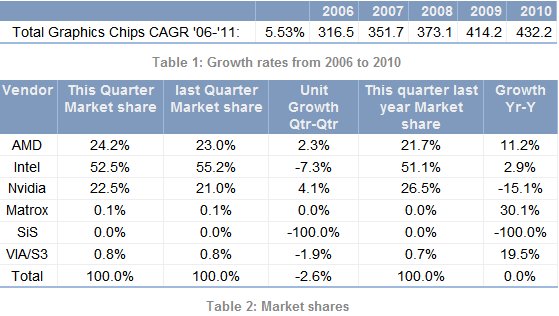