After the huge success with the launch of the 6990 from AMD, Nvidia were hot on their tracks with the release of their dual GPU card; the GTX 590. AMD not wanting to lose the market share for having "the fastest graphics card in the world" have decided to show their latest addition to the range by introducing a new series in the shape of the 7000 range of Radeons with the fastest single GPU card in the world; the Radeon HD 7770.

Google presents Gmail Motion, a new beta feature that lets you control your mail with your body.

The mouse and keyboard were invented before the Internet even existed. Since then, countless technological advancements have allowed for much more efficient human computer interaction. Why then do we continue to use outdated technology? Introducing Gmail Motion -- now you can control Gmail with your body.

NZXT goes pink. It's just an April 1st joke, but I think a pink Panthom may not look too bad on the desk of a female gamer.

NZXT is proud to a new color palette available for all PC enthusiast components and accessories…Pink! With the great splash of color, ladies will be encouraged to geek out and get their game on!

“PC Gamers are typically stereotyped as dudes” said Johnny Hou, Founder and Chief Designer at NZXT. “We feel it’s time for girl gamers to embrace their inner-fragger and join in on the fun!”

“Gamer Guys should embrace the bright pink craze knowing that the women in their life will be so much more accepting of marathon gaming sessions if they have a fabulous rig to play on” said Victoria Chiang, Marketing Manager at NZXT. “Only a real man is manly enough to have a computer case that matches his salmon pastel shirt!” 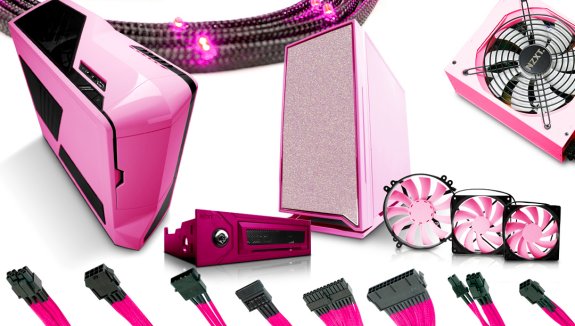