Posted on Saturday, Apr 09 2011 @ 06:15 CEST by Thomas De Maesschalck
Eindhoven University researcher Bart Gysen has presented an electromagnetic vehicle suspension system that promises to improve overall ride quality of cars by 60 percent. This active system is controlled by an onboard computer that adjusts the suspension within a fraction of a second, providing a smoother riding and improving safety by preventing cars from swaying into corners. More info at GizMag.

While active suspension is nothing new (at least, not for cars), it has previously mainly been integrated into hydraulic systems. According to the Eindhoven researchers, however, hydraulics can't react as quickly as their electromagnetic system, and therefore can't match the smoothness of its ride.

As with existing active suspension systems, this one should also make driving safer, as it would reportedly keep cars from swaying into corners.

About the same size as a conventional shock absorber, the system consists of a passive spring, an electromagnetic actuator, a control unit and batteries. The spring – appropriately enough – provides springing action, while the magnets provide passive shock absorption. If the batteries should fail, the system will still work as a purely mechanical suspension. 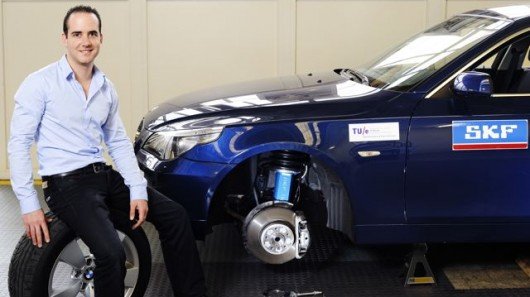