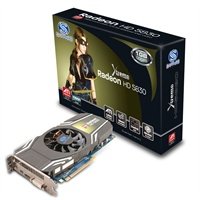 I don't really understand the point of launching previous-gen cards, but Sapphire just announced that it will soon start shipping the Radeon HD 5850 Xtreme and Radeon HD 5830 Xtreme editions. The company promises these products will offer great value.

Hailed as the most exciting development in graphics for several generations, the original SAPPHIRE HD 5800 series not only included the fastest single GPU available, but was also the first family of video cards in the world to support the advanced graphical features of Microsoft DirectX 11 and multi-monitor displays in Eyefinity mode. Now it’s back – with the exciting new SAPPHIRE HD 5800 series Xtreme Editions!

With a 150GB/s memory interface to 1GB of the latest GDDR5 memory, and a GPU architecture with a total of 1440 stream processors and 72 texture units, the new SAPPHIRE HD 5850 Xtreme speeds through older DirectX10.1, DirectX 10 and DirectX 9.0 games and applications – as well as delivering stunning levels of performance, detail, transparency and lighting effects in the latest DX11 games and applications.

Not far behind is the SAPPHIRE HD 5830 Xtreme Edition with its 1120 stream processors and 56 texture units. With its core clocks of 800MHz and 1GB of DDR5 memory with speeds of 1000MHz (4GHz effective), it represents a breakthrough in value for money for the gamer.

Both cards feature new SAPPHIRE original cooler designs, and optimised voltage regulation, which together with clock and memory speeds can be adjusted with the SAPPHIRE TriXX overclocking tool (free for users to download) to enhance performance. Both cards offer support for all the advanced graphical features of Microsoft DirectX 11 and deliver spectacular video clarity, speed and visual effects.

The SAPPHIRE HD 5800 series has an on board hardware UVD (Unified Video decoder) considerably reducing CPU load and delivering smooth decoding of Blu-ray™ and HD content for both VC-1 and H.264 codecs, as well as Mpeg files. In the SAPPHIRE HD 5800 series the UVD can simultaneously decode two 1080p HD video streams and is able to display HD video in high quality with Windows Aero mode enabled. HDMI capability is compliant with HDMI 1.3a and supports Dolby TrueHD and DTS-HD Master Audio.

In addition to spectacular image clarity, speed and visual effects, the SAPPHIRE HD 5800 Xtreme series supports the multi-monitor mode known as Eyefinity. This allows a single GPU to display a choice of images over an array of several monitors and to treat them as a single layer surface – or as one large display area.

The SAPPHIRE HD 5800 series is supported by AMD's DirectX 11 WHQL certified graphics driver which delivers support for all of the key DirectX 11 level features required for new gaming experiences and acceleration of next generation high performance applications.