Posted on Friday, Apr 15 2011 @ 21:19 CEST by Thomas De Maesschalck
Xigmatek shows off its Elysium, a new case with support for motherboards as large as EVGA's SR-2. The case will be sold in the EU for just under 160EUR.

Originally known for their CPU coolers, the manufacturer Xigmatek has successfully established itself as a well known case brand with a successful line-up of enclosures, which feature an unbeatable price/performance ratio. After launching different Mid-Towers, Xigmatek is now announcing the first Big-Tower by the name Elysium.

The term „big“ to categorize the Xigmatek Elysium can literally be interpreted as the flagship model of the manufacturer, as it is one of the largest cases on the market. 23 cm width, almost 62 cm height and a depth of 66 cm result in an enormous volume, easily able to hold nearly every hardware configuration possible. Especially extravagant systems profit from the space, as there is plenty of room for water cooling, SLI/Crossfire systems and even large mainboards like the EVGA SR-2.

In terms of the design, Xigmatek has combined their experience in cooling and cases to create a clean, modern look along with a long list of practical features. Twelve drive bays in the front allow for the ultimate expandability, while the brushed aluminum strips encompass these and add a classy note to the chassis. Xigmatek steers clear of unconventional forms, allowing the case to present itself with straight lines and massive size.

The top I/O panel holds a flurry of connectivity with 2x USB 3.0, 2x USB 2.0, eSATA and Audio plugs hidden under a protective, sliding cover. Additionally, a SATA hot-swap bay for 3.5 or 2.5 inch hard drives has been incorporated into the top panel, allowing for easy access to such storage devices. Multiple openings on the top and the side panel result in excellent cooling of the internal components, with the metal mesh and slanted openings.

Clearly the most important factor of the Xigmatek Elysium Big-Tower is its extreme size and resulting interior volume. Even the EVGA SR-2 HTPX mainboard fits within the chassis with room to spare, while E-ATX and XL-ATX mainboards leaving even more free room. The maximum length for graphic cards is 44 centimeters, which is much more than even the longest dual-GPU cards will require. Extraordinary is not only the space, but also the extremely well thought out design.

Instead of only offering a single opening in the mainboard tray for easy access to cooler backplates, the Elysium has another one right below the second CPU area of the EVGA SR-2, so that such an exchange is extremely easy with such a board as well. The Xigmatek Elysium is the one and only case of the exclusive HPTX format which offers this feature.

Numerous, rubber-lined openings in the mainboard tray allow for easy and extensive cable management. Even with the possibility of installing a large variety of mainboards within the Elysium, a perfectly clean and well managed interior is easily achieved with this system. To further reduce any potential cable clutter, the Elysium offers two separate PCBs to supply power to any fans within the system.

This means that the fans do not need to be connected to the mainboard or power supply directly, resulting in the necessity of additional splitters. Instead, a single Molex connector is sufficient to power up to 10 fans, while the included 3-pin cable can be used to connect both PCBs. As both units offer a Molex connector, the user is free to choose where to place the power supply and how to route the power cables.

The Elysium offers two ATX compatible PSU bays - one above and one below the mainboard tray. This also allows for the use of two such units within the case to easily power high-end systems with a multi-GPU configuration. With the 10 mainboard expansion slots, using 4 dual-height graphic cards is easily possible.

The forward area of the Elysium is reserved for the array of 5.25 inch bays, each of them equipped with a tool-less locking mechanism. Internal 3.5 inch drives fit into the two 4-in-3 modules, allowing up to eight drives to be installed inside the case. These rest on rubber rings and are cooled directly by the included fans.

These are of the 120 mm variety, while a 140 mm unit in the back and the 200 mm one in the left side panel are also part of the case. All of these feature embedded white LEDs to add subtle lighting to the Elysium. In addition to these four fans, the case can hold three 120 or 140 mm unit the ceiling, two 120 or 140 mm ones in the flooring and another 80 or 120 mm one right below the CPU area of the mainboard. Even a fan with 25 mm height will fit in this location due to the space between mainboard tray and side panel.

The ceiling and flooring of the Elyisum have a multitude of mounting options, allowing the installation of a variety of radiators of the formats 120, 140, 240, 280, 360 and 420. The maximum size of such a cooling unit depends on the location in which it is installed. External solutions can be utilized with the help of seven openings in the back of the chassis.

Four casters are part of the Elysium, making the relocation of a full system easy and painless. Openings in the underside of the chassis allow for quick and simple installation of these rolls.

The Xigmatek Elysium will be available in four variants. Either with a solid or windowed side panel in combination with black or silver aluminum strips in the front and on top.

The Xigmatek Elysium Big-Tower will be available in May for a price of 159.90 Euro at www.caseking.de. 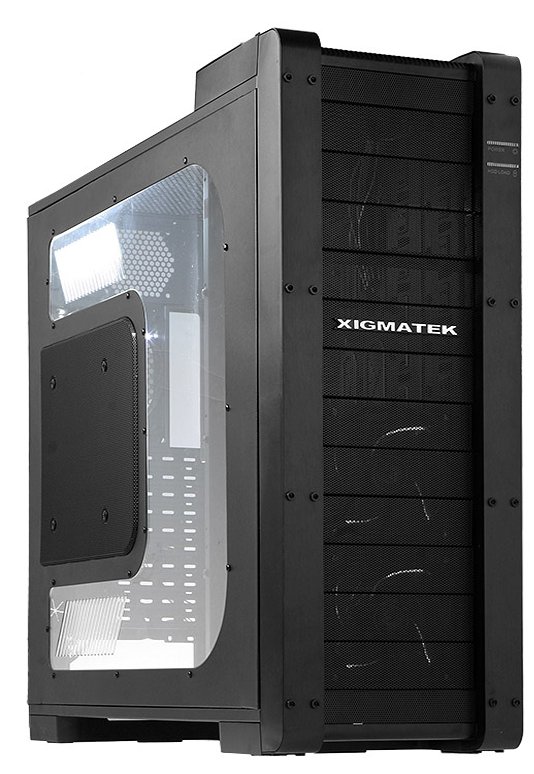