Posted on Tuesday, Apr 19 2011 @ 21:26 CEST by Thomas De Maesschalck
Bright Side of News noticed a slide from Intel that reveals the company is considering to bundle sealed liquid cooling kits such as Corsair's H50 with its Sandy Bridge-E series processors. These coolers don't outperform high-end air coolers, but they are pretty silent.

According to the slide, Intel is considering bundling the upcoming Sandy Bridge-E processors with liquid cooling setup such as Corsair H50.

Realistically speaking, there are only two companies who could land a contract of this magnitude: Asetek and CoolIT Systems. The picture in the slide shows Corsair's liquid cooling system designed and manufactured by Asetek, while CoolIT Systems recently announced cooperation with Corsair on future solutions. Regardless of who might get a design win (somebody from Far East?), companies involved cannot save a dime on the build quality of these parts - Intel bundling liquid cooling in their retail packaging could be a turning point for the liquid cooling industry as such, moving from high-end enthusiasts and people in the know to performance-oriented mainstream audience, a major sized market. 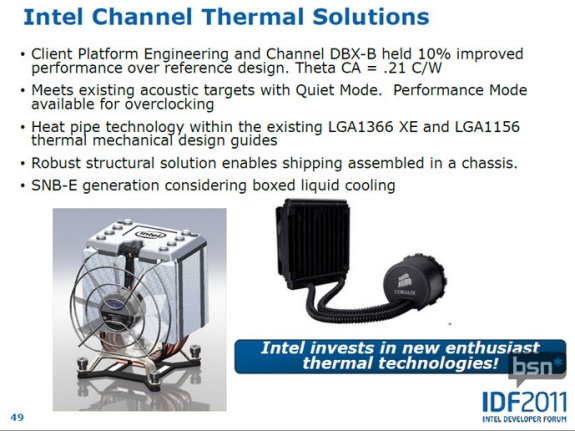