Posted on Friday, Apr 22 2011 @ 23:18 CEST by Thomas De Maesschalck
TechPowerUp reports Zotac is crafting a special GeForce GTX 580 with 18-phase VRM capable of handling a whopping 500W load. The card is equipped with two 8-pin PCIe connectors and uses an oversized PCB with a top portion that protudes above the full-height limit. Pricing and availability is unknown.

To cool the beast, there are two heatsinks, first is the component heatsink that is spread across the length of the card, cooling VRM and memory; and the primary heatsink, which is a massive aluminum fin array to which heat is fed by six 6 mm thick heat pipes. The heatsink is ventilated by two 120 mm fans. The card is overclocked out of the box, with the core running at 850 MHz, 1700 MHz CUDA cores, and 1100 MHz (4.40 GHz effective) memory. Display connectivity includes two DVI and one each of HDMI and DisplayPort. You can use two connectors at a time. 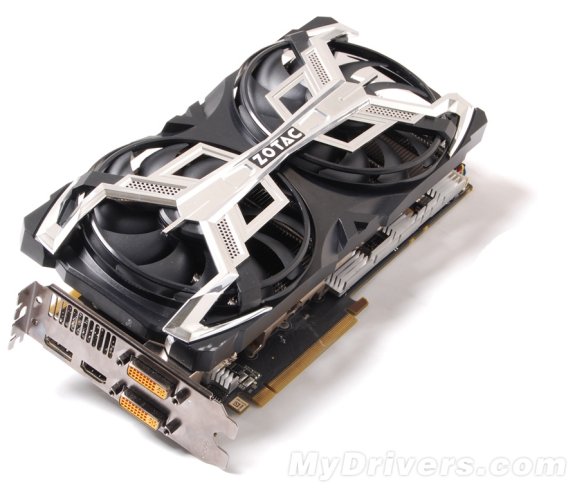