Posted on Thursday, Apr 28 2011 @ 22:57 CEST by Thomas De Maesschalck
TPU found details about Intel's Smart Response technology, you can read it over here.

Smart Response provides a middle ground between capacious but slow and inexpensive hard drive storage, and fast but small and expensive SSD. With it, one can retain a high-capacity hard drive, and speed it up using a small SSD. The technology uses the small SSD's low access times and high speeds to make it work as a cache of the HDD, it might even store copies of key parts of the HDD such as the boot volume and system files, to make booting faster, and the system more responsive overall. The technology that goes into this, however, isn't ground-breakingly new. It builds upon some principles of Windows ReadyBoost that lets you use flash-based storage devices as system caches, and similar HDD/SSD hybrid storage solutions such as SilverStone HDD Boost. 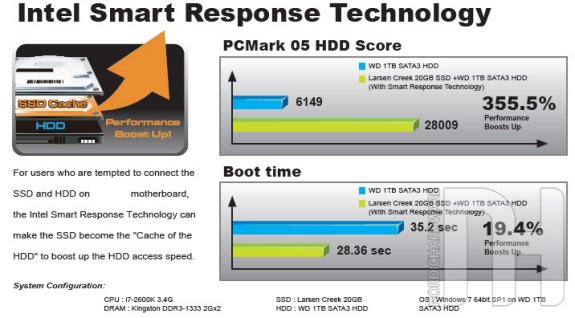